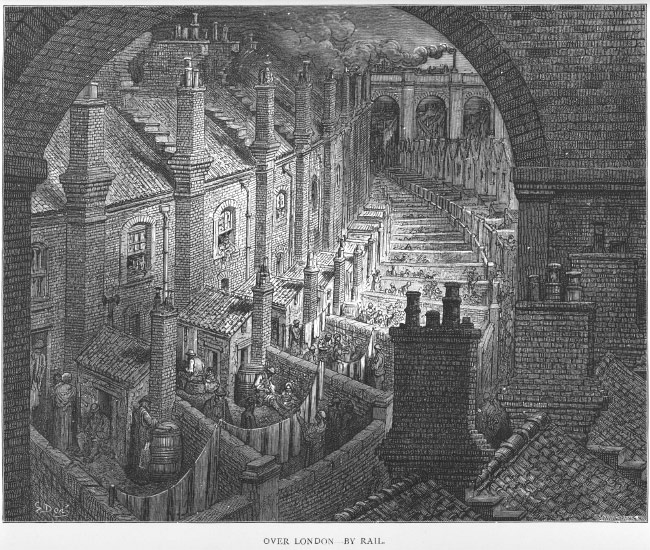 Early to mid-twentieth century London was truly a toxic place to live. Air pollution had taken over full force in the wake of the Industrial Revolution and began to wreak havoc on the health and lives of many Londoners. In order to completely understand the effects of this horrible pollution, we must first look into what caused such pollution. The Industrial Revolution and large surge in factory production, smoke from burning stoves and chimneys, and the natural environmental predisposition London had for heavy fog became the perfect mixing pot for deadly atmospheric pollution.

The Industrial Revolution was a crucial part in the history of technological advancement and without that boom in industry, the world as we know it would not exist. This, however, did not transpire without some serious side effects. Workers inside of factories were usually the first to be exposed. In some cases, the metal dust and shavings from working in tool factories would become suspended in the air for a time and the workers would then breath this particulate matter. By either refusal to wear protection or lack of regulation, this was a common theme in factories (“The Trades of Sheffield”). The lack of regulations also allowed the factory owners to cut corners and not set up proper safety precautions such as putting filters in the exhaust vents. This type of neglect, which was commonplace, contributed to the major pollution in the air. The pollutants being kicked out of factories were the most serious. This was the result of combustion of fuels such as coal and oil (Wembley, 1954).

In addition to the chemical pollutants being spewed out into the air from factories, a more domestic problem contributed its fair share of pollution. At this time, fireplaces were used for heating the homes and gas burning stoves had taken over as well. In such a tightly packed area such as the residential areas of London (see picture above) the smoke produced from each individual residence really could add up. The magnitude of the smoke emission from residential areas was immense. To put it in perspective, for every one ton of coal burnt by factories or other industrial sources domestic chimneys produced twice as much smoke discharge (Wembley, 1954). While wood burning is not near as toxic as coal or other petroleum products, it does create lots of smoke that can then help trap the more harmful pollutants. Certain areas were much worse than others.

Another factor that traps the toxins and pollutants in the air is much more of a natural and environmental one. Fog. London has historically been known for its fog. It has the perfect climate for it and the Thames river just adds to the heavy humidity surrounding the city. Early in the morning the fog would be thick and white, just like the fog out in the country. By the middle of the day, house fires would add to the thick fog and make it become yellow and more irritating to the eyes and throat. This only progressed as the day went on with even more toxins being added to the air from factories, trains, or automobiles. It would then ease up a bit in mid-afternoon but the cycle would start over again as the sun set and the new day began (Luckin, 2003). These daytime hours had to have been the stuff of nightmares. It would still be dark at noon at times because the fog shrouded the sun, every breath a person took burned and their lungs filled with harmful chemicals in the air like sulfur dioxide and other waste from burnt petroleum products. Unsurprisingly, this led to many health problems for the people of London.

This deadly atmospheric pollution mixed with heavy fog is what then led to the creation of smog and subsequently the Great London Smog of December, 1952 which ended up resulting in the death of around 4,000 people (Ealing, 1965). Without recognizing the problem and taking charge on setting regulations for burning and factories this type of pollution would not be fixed and it would continue to plague the people of London.