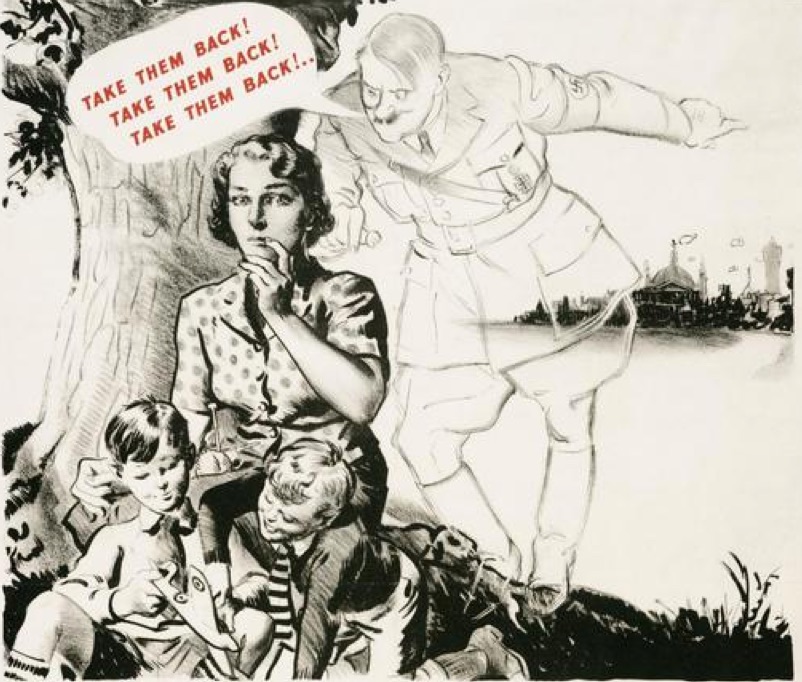 On September 1, 1939, the British government officially recognized the German advance would soon put Germany in the position to bomb its great cities and put its people in grave danger. In particular, the British government was concerned with protecting its youth from the bombardments as well as other priority classes. In a great attempt to shield a generation, and with the anticipation of the German advance, Britain decided to evacuate its youth and priority classes from its great cities.

As the minister of health, Rt. Hon. Walter Elliot put it “It would be a great national undertaking” (Smallman-Raynor 396). The plan to evacuate had been made a year prior (Hussey 417). The government planned on evacuating nearly 1.47 million inner city residents to the rural areas of Britain and Scotland thought to be safe from the German aerial advance. For the modern western world, particularly Britain, this would be a mass movement of unprecedented proportions. This would only be the first phase of evacuation. Over the course of World War II (1939-1945) nearly 4 million citizens, mostly children, would be displaced in evacuation procedures. Mental health patients would also be evacuated in great numbers as well (Wheatcroft 481). The result of such a mass movement would have troubling consequences to the health of areas receiving these refugees.

The British officials at the time seemed to be more concerned with getting these children out, rather than concerning themselves with the diseases epidemics that could erupt in the rural areas as a result of the massive influx of urban dwellers. Whether they weighed the consequences or not, the epidemics that would eventually spread probably did not claim near as many lives as what leaving the children in the path of the bombings would have claimed. Before the evacuation even went into effect, medical officers warned of the spread of infectious disease to vulnerable rural population (Smallman-Raynor 401). In a medical officer of health report from Ealing in 1940, it seems medical officers tried to take a preventative measure by inspecting children before evacuation to help limit disease spreading. The biggest concern medical officials had at the time was the exchange of infectious diseases between two very different population groups (Smallman-Raynor 397). The two groups were the evacuees coming from urban environments and the receiving group from rural environments. The concern was that in urban areas, epidemic diseases were fairly common. These diseases were able to spread very easily in the close quarters of an urban setting. Further, the urban children were actually more immune to these diseases because they had been in contact with them since childhood; something rural folk did not experience (Smallman-Raynor 397). The rural areas, in contrast, provided an environment where infectious disease struggled to spread. The close quarters didn’t exist like the urban areas, and so children of the rural areas may never of come in contact with endemic diseases like the urban people. Consequently, these people didn’t have the immunity like the people they were getting ready to receive, making rural children highly vulnerable. With these immune factors playing in, the mass movement would have a noticeable increase in infectious disease in areas were endemic diseases were more or less rare (Smallman-Raynor 417).

Some of the endemic diseases that have been studied recently are scarlet fever, diphtheria and poliomyelitis (Smallman-Raynor 417). It is interesting to point out that observations were made by health officials during and right after the war that concluded the infectious disease epidemics were not near as bad as expected. In some cases, it seemed the infectious diseases were on par or less than previous years such as 1938 (Smallman-Raynor 417). However, modern computing models and new insight have confirmed that there were indeed increased levels of epidemic activity in rural areas relative to London. In fact the disease rate in reception areas exceeded the rate of endemic diseases in urban areas by a factor of five (Smallman-Raynor 417). This shows quite a dramatic increase in areas that normally did not show endemic activity. Scarlet fever seemed to be most affected by the evacuation. Scarlet fever was affected by accelerated disease propagation from London. In another medical officer of health report from Bethnal Green Borough in 1944, one can see on a table the increase in measles, whooping cough, and tuberculosis during the evacuation years. Interestingly, the author also makes a note that these numbers were increased as a result of child evacuation.

One other interesting notion is the amount of mentally handicapped children that were evacuated at this time. An estimated 60,000 handicapped children were evacuated before the war even began (Wheatcroft 481). This was different than the other evacuations of non-handicapped children that were carried out during the war. Their experiences, as probably expected, were different than those of the other children. Regarding the pre-war evacuation, officials did this in attempt to dampen the trouble evacuation could cause on these special needs children (Wheatcroft 481). However, it seems these children suffered more than the non-handicapped. Moving to different homes and finding adequate care seemed to be key reasons for the increased distress these children experienced.

In effect, the dispersal of children from urban areas to rural areas in an effort to protect them from German bombings did in fact propagate infectious disease. It can be left up to historians whether the evacuation of children was a justifiable concept. The cost of not evacuating and loosing much of a generation from bombings was probably far greater than the cost spread of infectious diseases.

The massive diaspora of English children that took place during World War Two created an environment in which many evacuated children developed mental health issues that would plague them for the rest of their lives, in addition to the immediate health issues the migration induced discussed above. In the wake of a war that was won and the furor of a country in celebration an entire generation found itself displaced – alone in their continued malaise. With the help of a new endeavor to restore the concepts of family and the classic English concept of the ‘stiff upper lip,’ used to persuade those in times of hardship to carry on as if nothing was wrong, the individual issues of children were all but ignored after the war. As this generation grew up many suffered from bouts of depression and anxiety caused by their experiences during the war, resulting in health issues that propagated further in time than expected by health officials during the war.

Millions of children were evacuated from vulnerable cities to rural areas. Separated from their parents, friends, and sometimes even siblings these children were placed into temporary living situations. The goal of an effort titled “Operation Pied Piper” was to evacuate children to safe areas of the country as fast as possible due to the approaching war. Such a large migration of citizens surely could not have been done effectively in such a short time. Anglesey, a town on the Irish Sea, expected only 625 children and instead received 2,468, and similarly Pwllheli, in Whales, was not expected to receive any evacuees and yet 400 showed up (Trueman). This was war, and exigent circumstances resulted in debilitating situations for those advised to flee their homes.  Children found themselves without parents to raise them; some lost contact with their relatives left behind,  some lost their relatives in the time away, and some found themselves in the care of less-than-able guardians. These children’s upbringing was now at the whim of a nation at war and an administration whose focus was on limiting the negative effects of the war rather than preventing them.

Authorities were not entirely blind to the effects that evacuation would have on the development of the nation’s children. In 1939 John Bowlby and his colleagues wrote a letter to the British Medical Journal stating that the evacuation of children could negatively affect the development of the children’s personalities. Bowlby went on to develop a theory of attachment from 1964 to 1980 that describes how a child develops his or her personality through childhood experiences. Children after the war were also not completely ignored; Charlotte Carey-Trefzer studied cases at the Hospital for Sick Children in London. This study found that evacuated children suffered from a “deeper and more persisting” neurosis than those children who had been disturbed by air raids (Rusby, Tasker 392) .  This appears to be the only significant study of evacuated children post-war until the 1980s when psychologists began to study the long term effects of the evacuation and found that the causes of mental illness were linked to upbringing before evacuation, relationship with parents, age of separation, frequency of contact with parents, and the state of care in foster homes.

“History has here made a cruel psychological experiment on a large scale” -K. M. Wolf

In 2009 a study was published in the journal, Aging and Mental Health which surveyed residents of the county of Kent who had been evacuated during World War Two. The study found that those who were evacuated at a young age, and who received poor foster care, were at a much higher risk of developing neurosis later in life. After examining all of the factors found to be associated with disorders due to the evacuation discussed above, the research compared surveys of evacuees and a control group and found that children who had been evacuated were more likely to experience depression and anxiety – as expected – but the previously evacuated had also developed higher amounts of self-criticism leading to deeper disorders. The study states that these results are in accord with Bowlby’s theory of attachment and the research of psychologist on the same issue in the 1980s (Rusby, Tasker) .

Health officials in England had a clear warning of what might happen to these children after the war had ended through Bowlby’s letter and yet no measure was taken to assist the children of the nation post-war.Either by an underestimate of the severity of the issue or in the elation of the moment an entire generation was left to fend for itself psychologically. It is important to note that a reported sixty percent of evacuated children returned home by 1940 due to an apparent lack of danger from air raids (Trueman). These children who eventually experienced bombings turned out to be better off in the long run than those who remained evacuated and isolated from their homes. The government of England did what they though was best in light of the situation. Yet, almost immediately after the war a study from Carey-Trefzer exposed the deep issues with evacuation and no move was made to assist those falling into a lifelong pit of maladjustment.

By Cody Cox and Jacob Tice