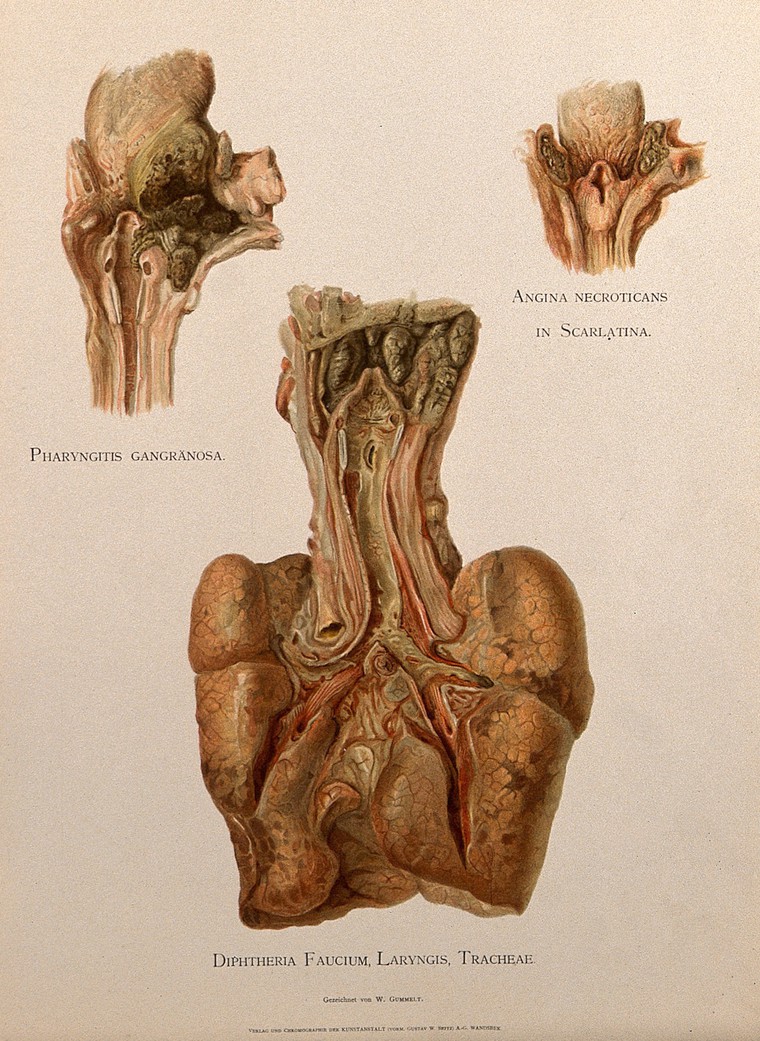 Between the late 19th and early 20th centuries diphtheria was a major threat to the metropolitan areas of England. The disease now has both a vaccine and an antitoxin, but prior to their developments the number of cases in London and the surrounding areas reached epidemic proportions. Diphtheria primarily affected children, and the mortality rate was high. Contributing to the mortality rate was the co-occurrence of diphtheria with other deadly diseases. The medical officers of health (MOH) in London often reported diphtheria rates in a group with other diseases that had similar symptoms. In early reports it was grouped with many other diseases which were not well understood but seemed to happen in the same unsanitary areas. As time went on the way the MOHs recorded co-occurrence changed from mass groupings to more specific pairings that indicated a better understanding of what the diseases were and how they were caused. The evolution of the recording styles of co-occurring diseases reflects the discovery and rise of germ theory.

Diphtheria is a bacterial infection that attacks the upper respiratory tract (“Diphtheria”, 2018). It causes throat swelling, coughing, fever, and if left untreated it can cause death. Unfortunately, the symptoms of diphtheria are similar to other upper respiratory diseases that leave a coating of mucus on or around the throat, making it difficult to diagnose by superficial examination alone.

Prior to the widespread acceptance of bacteria, diphtheria was classified as a zymotic disease. A zymotic disease was a disease that doctors believed was caused by zymosis, a fermentation-like process, of the blood (Stone, 1886). Diseases classified as zymotic typically had a very high morbidity rate and included many of the leading killers of the late 19th century.

As germ theory developed, more and more diseases lost the “zymotic” classification. Eventually the term was dispensed with altogether.

Before the diphtheria causing bacteria was discovered in the 1880s (Doerr, 2019), diphtheria was considered a result of general unsanitary conditions. Part of the MOH initiative was to monitor the city conditions, occasionally falling under the jurisdiction of sanitary committees (Tanner, 1999). Often MOHs would group diseases together, whether because they were difficult to diagnose from each other or because their sources were thought to be connected.  In 1859 the MOH of St. George, England noted that everywhere that was struck by scarlet fever was also struck by diphtheria (St. George, 1859). The correlation between scarlet fever and crowded, unsanitary conditions was well observed by then (Tanner, 1999). Hence it was natural to assume that because diphtheria and scarlet fever occurred together that they shared the same cause. In 1862 the MOH of Bethnal Green submitted an annual report with scarlet fever and diphtheria deaths grouped together (Bethnal Green, 1862). Another disease that was sometimes considered a zymotic disease to be grouped in with diphtheria was Cynanche Maligna (Mile End, 1866). Cynanche Maligna was less prevalent than many other zymotic diseases, so it was sometimes not recorded at all. The early mentality of MOHs about diphtheria is best summed up by the 1866 report of the Mile End MOH which states that “zymotic diseases are the best test of the sanitary condition of any place where any large numbers of people are massed together” (Mile End, 1866).

At the turn of the century, germ theory was new, but gaining traction fast. At the end of the 19th century in nearby Paris the second Great Stink pushed germ theory even further. The first Great Stink of Paris was a stench in 1880 that lingered for months and made many people sick, but the second Great Stench in 1895 was treated quickly and efficiently with a better understanding of germ theory (Barnes, 2006). Such current events may have influenced the reports of the MOHs in London.

The diphtheria-causing bacteria was discovered in 1880, and an antitoxin discovered in 1884, but some medical practitioners still refused to accept bacteria as a major factor in disease (Doerr, 2019; Stone, 1886). This push back could be why some MOHs continued to group diphtheria and other diseases together. But as the science of disease progressed, the MOH began to differentiate between zymotic diseases. The term zymotic disease was still used, but as understanding of the causes of the individual diseases increased the group classification began to fall apart. For example, in Battersea in 1896 the MOH reported on various zymotic diseases including diphtheria, typhoid, and scarlet fever, but gave smallpox, a disease once considered zymotic, its own section (Battersea, 1896). The same was happening around the country for the other zymotic diseases. In Surbiton in 1896 the MOH reported on various zymotic diseases, but they were all recorded and discussed separately (Surbiton, 1896). By the late 1910s the term zymotic was very rare.

By the 1920s, it was understood that diphtheria was contagious. Such an understanding would not have been possible without the rise of germ theory. A common sight in London was the fever cart taking sick people away to be isolated (Sarginson and Guppy, 2003). Although the fever cart was meant to protect people from spreading disease to their loved ones, there was much opposition to the MOHs and their power to take people, especially children, away by fever cart. It is possible that some of the MOHs, as the public sometimes accused, were taking people away without proper diagnosis (Sarginson and Guppy, 2003). Such accusations might have some merit, especially due to the rise of MOHs recording diphtheria along with croup or whooping cough or other diseases with similar symptoms (Harrow, 1918; East Barnett valley,1920). However, even if these diseases were recorded together because of sloppy or rushed diagnostics, it is a marked change from  the MOH reports of previous years where diseases were grouped by misattributed causation.

After the diphtheria vaccine was developed and well distributed the number of cases dropped drastically. Diphtheria mortality rates were still sometimes being recorded in conjunction with other diseases, but they were being recorded alone as well. This indicates that the MOHs were looking at co-occurence because of how it specifically affected the mortality rather than misunderstanding the cause or misdiagnosis. In East Ham in 1937 the MOH reports on scarlet fever and diphtheria, but the report focuses on each separately as well as together (East Ham, 1937). Similarly in Kensington and Chelsea in 1969 the MOH reports on whooping cough, tetanus, diphtheria, and the pairwise co-occurence of all three (Kensington and Chelsea, 1969).

The MOHs of London recorded the co-occurrence of diphtheria along with various other diseases for over a century, but the way in which the co-occurrences were reported parallels the rise, resistance to, and finally acceptance of, germ theory. The early classification of zymotic diseases is completely debunked now, but it had supporters defending it well after germ theory became the prevailing theory. But slowly the MOHs unified in their understanding of the true causes of diseases.