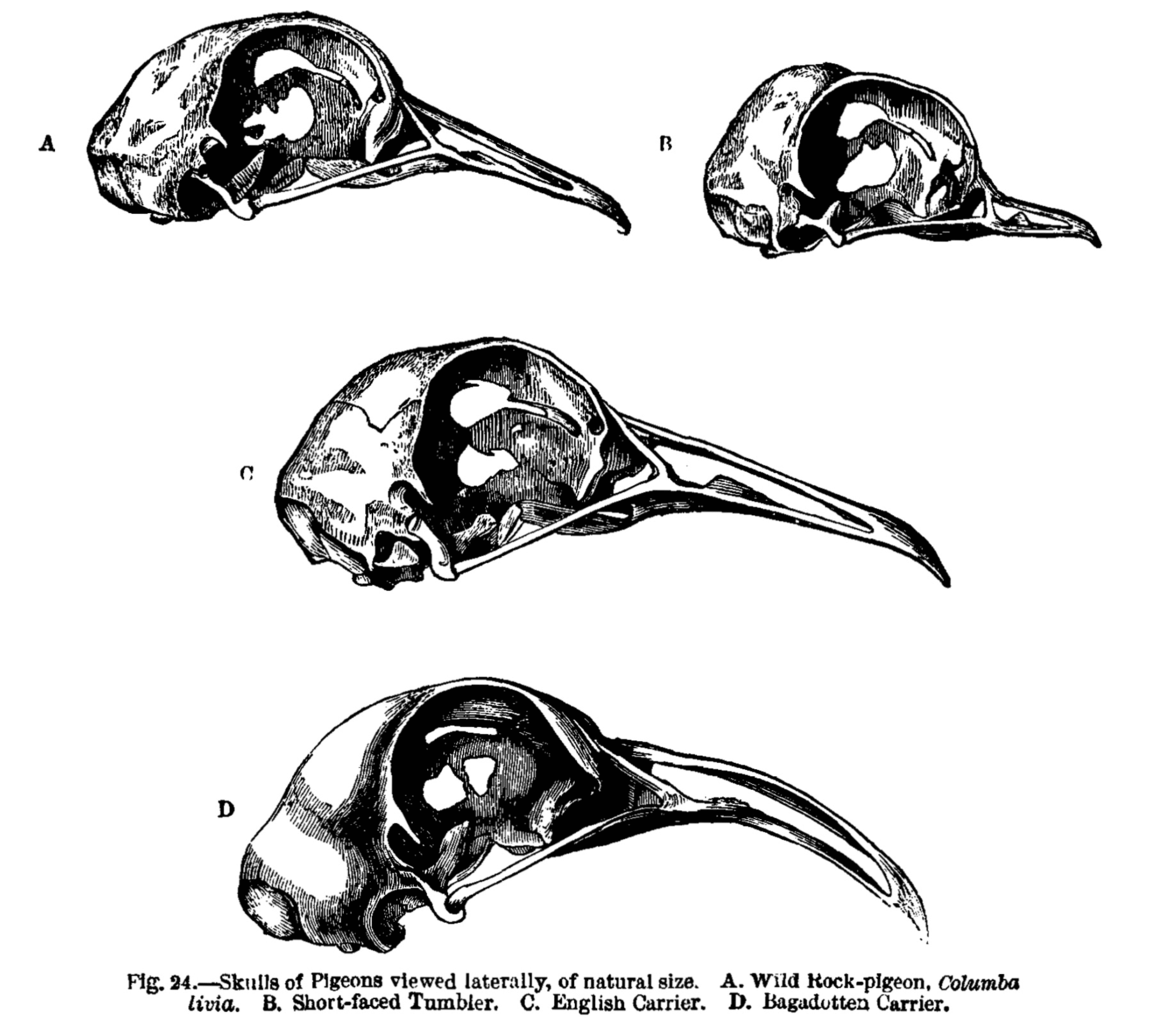 Over the years, pigeons have thrived in urban environments due to a variety of reasons. One reason is that they have almost no natural competition for resources such as food and water. There are also no natural predators in most urban habitats. Because of this, most modern cities like London have had to devise ways to reduce the numbers of this bird. For the most part, they are considered to be nuisance animals, which cause many public health problems and damage. However, this was not always the case for these birds. According to A. W. Schorger’s article “Introduction to Domestic Pigeons,“ the domestication of pigeons has been going on for hundreds of years. Schorger credits the Frenchman Lescarbot with the introduction of domesticated pigeons to Europe in 1606 (Schorger, 642). The domestication of pigeons took place not only in Europe, but in the United States as well. Some birds were caught in the wild and tamed; others were bred in captivity. Typically the wild pigeons are used for breeding purposes and their young are raised as domesticated pigeons  (Deane, 60). Many pigeons that inhabit the cities now are descendants of domesticated pigeons. The Pigeon Control Resource Center claims, “The feral city pigeons in towns all over the world today are largely refugee birds from abandoned dovecotes of yesterday.” Pigeons had a range of uses in the 19th and 20th centuries. They were used as carrier or homing pigeons to carry messages. They were used for racing. And they were bred for specific physical characteristics, often as a hobby, but also has a scientific activity.

Though pigeons are now thought of as bothersome and destructive, they once played a very important role in communication. The most prevalent use of domesticated pigeons used to be carrying messages. Before telephones, and even telegraphs, homing pigeons were used as the most reliable source of distant communication. “The earliest documented use of pigeons by an army was by the Romans more than 2,000 years ago” (Razes 2007). The British began using homing pigeons to carry messages in the eighteenth century (Johnes, 363). Carrying mail seemed fairly simple for pigeons because of their wings and great flying ability. According to Martin Johnes, pigeons were used to transmit military news, as well as market prices, and even horse racing results (363).  However, pigeon messaging would gradually come to an end due to the innovations of new technology. During the 1850s, there was a substantial growth of the telegraph system, and people were able to communicate with each other without the use of pigeons (Johnes, 363).

However, pigeons were used for communication during both World Wars of the 20th century. During the first World War, most radio technology was still in its early stages, and was not as reliable as it is today. But during wartime, it was vital to maintain a steady line of communication between the command center and all  outposts. Pigeons were the only way messages could be delivered over great distances in a short period of time. They had an “astonishing success rate of 95% getting through to their destination with their message” (Trueman 2015). According to Charles Walcott, pigeons that are caught in the wild, but raised from a young age and live in lofts, can be trained to fly back to their homes (Walcott, 574). This factor contributed to the use of over 100,000 pigeons in this war alone. During one particular battle called the “Battle of the Marne,” French troops were progressing against the Germans army and “in the heat and disorientation of battle, pigeons proved to be the best way of sending messages to the French headquarters” (Trueman 2015). The most incredible thing about this story, was despite the constant relocation of the pigeon lofts due to the advancing French army, all 72 pigeons made it back every time.

Because of their success, when the U.S. entered the war, “the British gave over 600 pigeons to the US Army Signal Corps” (Armed Forces History Museum). This later came as a great advantage to the Americans when Cher Ami (a famous pigeon who flew many important messages) delivered a call for help from a stranded American squadron. The next day, after many of the troops had been killed in action, the message was successful in reaching its checkpoint and help arrived. “The bird’s perseverance is credited with saving more than 200 lives” (Armed Forces History Museum). The Medical Officers of Health for London even make an exception for captured homing pigeons stating, “Homing pigeons would not be destroyed in the general round up” (City of London, 1928, 63).

Pigeons not only served a purpose in both World Wars, but also had (and have) a place in entertainment. Many breeds of pigeons can be used for racing. This hobby involves the same idea as homing pigeons but instead of carrying a message back to their loft, they are racing to it. According to W. F. Hollander, one reason individuals breed pigeons is to use larger pigeons in competitions such as racing. The pigeons that compete often stay in fancier places such as a roof-top or back-yard lofts (Hollander, 462). Pigeon racing was popular among working class men in Britain during the late 19th and early 20th centuries. Martin Johnes explains that pigeon racing brought thrill and excitement but also provided intellectual rewards of breeding and rearing of pigeons (361). In her book, Beastly London, Hannah Velten notes that pigeons were traditionally associated with working class men, in part because they were cheap and easy to breed (Velten, 201).

There are many types of races the pigeons can do. One in particular is called a one-loft race. In this race, all the pigeons who are taking part, are taken at 6 weeks and raised in 1 loft together. After they are all trained properly, they are taken to a spot away from the loft and they race back. After this particular race, the pigeon owner can pay another entry fee and have their pigeons transferred to another loft for yearling pigeons, and another race. Alternatively, the owner can opt to return their pigeon to the breeder or sell it to another pigeon fancier” (RPRA). Another form of pigeon racing involves a pigeons and it’s keeper, lining up at the starting point and racing with other pigeons from the same point. This is the more traditional way but has changed recently due to technology. The birds are fitted with a rubber with that calculates average speed and height and also the path they took. “The bird with the highest average speed is declared the winner” (RPRA).

While working class men used domesticated pigeons for racing, fancy pigeon breeding became a hobby for the wealthier men in London. The pigeons owned by wealthier men were traditionally used as prize birds that would be entered in pigeon classes (Velten, 202). These men would place their fancy pigeons in shows and possibly win prizes. This is very similar to some of the practices with livestock we see in modern day America. This is different compared to the working class men of the time period, who used domesticated pigeons in races.  Ultimately, pigeons were easy to care for and cheap to breed, which allowed different socioeconomic classes to use pigeons in different ways.

Pigeon fanciers mainly bred pigeons for perfection of appearance rather than for utility (Thaurissan, 191). As described by Martin Johnes, pigeon fancying meant keeping the pigeons for their aesthetic and intellectual appeal and developed fashion among the pigeons (362).

One main issue with domesticated pigeons would be the mites that tend to attack pigeons. According to W.F Hollander, there are two specific types of mites: Demanyssidae and Phinoyssidae (464). Mites are similar to ticks because they tend to suck blood, which is what these mites were doing to the pigeons. Breeders of pigeons often dealt with these types of mites which could harm their pigeons. This served as a huge problem for the breeders.

Pigeon-breeding in London raised concerns. In 1870, the MOH for Paddington noted, with some annoyance, that he could do nothing to deter pigeon breeders as long as they kept the animals in a cleanly state, despite the noise and general nuisance they caused neighbors:

Poultry keeping increases to a great extent in London, and frequent complaints are made to me that fowls should be done away with as a nuisance. It ought to be more generally known that I cannot proceed against the owners of domestic animals for the noises they may make. It exceeds my province to interfere with fowls, pigeons, and dogs if kept in a cleanly state. Cock-crowing at 1 a.m , the barking of dogs, the cooing of pigeons near your chamber window, or any other nuisance arising from noise, by which the sleep of nervous people is disturbed, is a serious annoyance, and probably ought, as in the manner of the street music, to be under control, or to
be put down by law ; but I cannot treat them as Sanitary nuisances. (Paddington, 1870).

In 1914, the MOH for Finchley complained about the deplorable conditions in which pigeons and other birds were kept:

Judging from the number and variety of domestic live-stock, such as fowls, rabbits, pigeons, etc., kept in the yards or gardens in connection with a large number of small houses in the district, the occupiers appear to possess an unusual propensity for keeping animals, with but little regard for the suitability of the premises. In many instances the limited air-space within the curtilage of their dwellings does not permit of the keeping of these animals under proper sanitary conditions, and, in some cases, they are housed in a manner which is strongly suggestive of the infliction of actual cruelty upon the victims of the householders’ “hobby.” If a remonstrance is made at the time of an inspection, the reply often received is to the effect that a profit is obtained, especially in regard to the keeping of fowls. (Finchley, 1914)

Clearly these complaints were directed at working class pigeon breeders, not their wealthy counterparts.

Although Medical Officers of Health in London generally thought of pigeons as a nuisance and a health hazard, many people believe that because of all of the benefits that pigeons have provided us in the past, the extermination of these creatures is inhumane.

Bert Theunissen, “Darwin and His Pigeons. The Analogy Between Artificial and Natural Selection Revisited” Journal of the History of Biology Vol. 45, No. 2 (Summer 2012), pp. 179-212.

Hannah Velten, Beastly London: A History of Animals in the City. Reaktion Books, 2013.