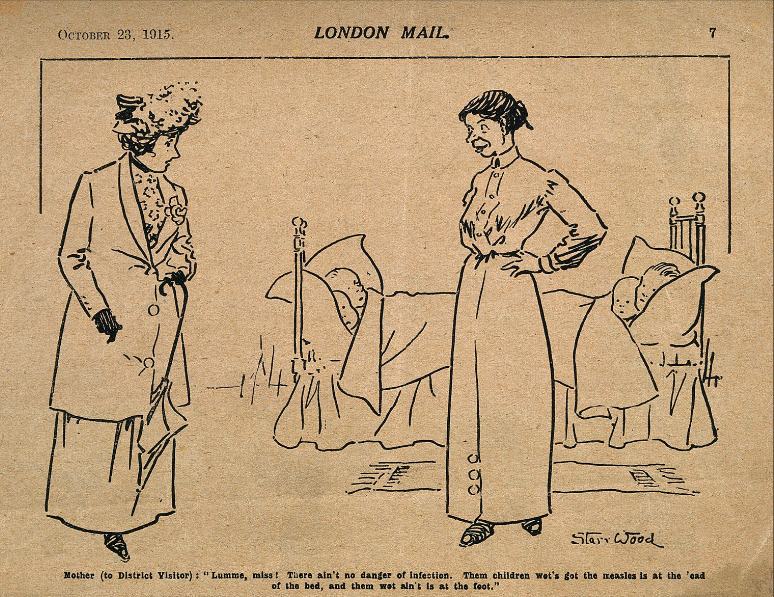 During the 19th and 20th centuries, individuals were prone to catch highly contagious diseases for which there were no known vaccines or cures. Measles, a viral disease that suppresses the immune system, is primarily an endemic disease of children. The origin of measles is unknown, but it is most common in children who are under 2 years old. This disease took the lives of numerous children and adults prior to the discovery of its vaccine. However, even today some children do not receive the measles vaccination due to lack of access, parents being opposed to the vaccine, or simply because they are unaware of the need for the vaccine. In the past, since measles was extremely common, many believed that it was an unavoidable stage of childhood (Hendricks and Blume, 2013). To examine the effects of measles, I looked at Medical Officer of Health Reports to evaluate the extent to which this disease impacted children and several communities in London.

Measles is the most contagious in its early stages, so it was crucial for children who were suspected of having measles to refrain from going to school. When children are in class, they sit in close proximity to each other in a room with confined air space (MOH Finsbury 1902). To prevent the disease from spreading to other children, those with measles could not come to school. In the most extreme cases, the schools were shut down. Since measles is spread through direct contact with the disease, schools did not see the need of disinfecting furniture (St. Pancras 1910 ). The schools that were shut down did not clean any equipment used by the children.

In several towns, schools were the most common places were measles was spread. Schools and measles outbreaks were positively correlated. When there are “no school outbreaks, there are very little measles” (MOH St. Pancras 1916 , pg. 36). In an effort to minimize the spread of measles, the London County Council implemented Sanitary Inspectors. These individuals would visit the homes of children with the disease and advise neighborhoods of children who had it (MOH Shoreditch 1931). In the town of Lambeth, these sanitary inspectors would advise the head teachers on the conditions of children who were absent from school (MOH Lambeth 1926). Schools would advise parents not to send their children who appeared to be sick in any form. The symptoms of measles usually start with the same symptoms one feels when they get a cold. During these early stages, the disease is the most contagious. For this reason, parents would assume their child had a cold and send them to school, where other children were very likely to become infected.

An individual who has contracted measles might experience mild symptoms in the early stages of the disease. These symptoms can include “sneezing, coughing, running at the eyes and nose” (MOH Croydon 1910, pg. 115). Deaths can occur when children who have measles are kept in unhealthy conditions. They need to be kept in well ventilated rooms and are to keep all body parts warm until they have recovered (MOH Shoreditch 1931 ). Furthermore, children should be kept out of public places. Since it was difficult for parents to differentiate between their children having a common cold or measles, the disease was hard to control. Parents would not notify the school or health officers which meant that their children would be left untreated and spread the disease. It was not until the later stages of the disease, when the children would develop rashes, that parents would alert the head teacher (St. Pancras 1910 ). The lack of speed in notifying the schools lead to high rates of children infected with measles and death.

In most towns, the death rates increased when there was a measles outbreak. The disease was said to be the most fatal to children under the age of 2. This is due to the fact that as one gets older, their immune system has increased resistance against the disease (MOH Acton 1934 ). Younger children who were breastfed had the greatest chance of not getting the disease because the mother would have helped build up their immune system (Picard 2009).

In an effort to notify the public of the horrors of measles, there was a proposition to “increase propaganda in the Infant Wellness Centres” (Stepney 1934 , pg. 119). Although measles was the leading cause of death in many parts of London, some places experienced few deaths caused by measles, such as Acton, who reported only 16 deaths (MOH Acton 1924). This is due to the fact that measles outbreaks were observed to occur every 2 to 5 years (Kim-Farley, 1993).  One report recounts how 38 children were given the measles vaccine to test its efficacy during the next epidemic year (Friern Barnet 1964). It was not mentioned whether the vaccine was effective in preventing measles.

Before the creation of the measles vaccine, the disease claimed the lives of millions of children. The Medical Officer Reports demonstrate how various parts of London were impacted by the disease and how the most prominent cause of death was measles. The disease quickly spread throughout schools because parents would be unaware that their children had measles, and would send them to class. This led to healthy children contracting the disease. The prevention of measles was of priority, but in many towns this failed due to the disease being highly contagious and easily spread.