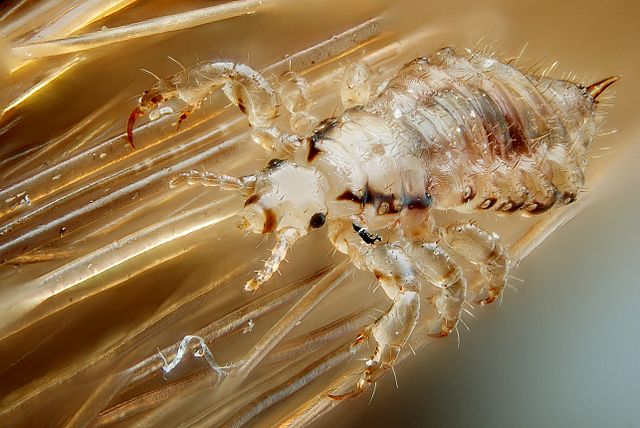 The most common symptom of head lice is an itchy irritation, which is caused by the saliva that the louse produces while feeding (Frankowski, Leonard 2002).  Additional symptoms include a tickling feeling of something moving in the hair and sores on the head caused by scratching (CDC 2015).  These sores can sometimes become infected with bacteria found on the person’s skin (CDC 2015).  A person may also experience irritability and difficulty sleeping because head lice are most active in the dark (CDC 2015).

How does head lice spread?

Head lice cannot hop or fly; they move by crawling (Frankowski, Leonard 2002).  The louse can crawl 6 to 30 cm per minute, making them difficult to find on the head (Frankowski, Leonard 2002).  Direct contact with the hair of an infested person is the most common way to get head lice (CDC 2015).  Head-to-head contact is common during play at school, at home, and elsewhere like camp (CDC 2015).  Spread by contact with clothing or other personal items, such as combs or towels, used by an infested person is less common (CDC 2015).  Animals do not play a role in the spread of head lice and personal hygiene and cleanliness in the home or school has nothing to do with getting head lice (CDC 2015).  Head lice are not responsible for the spread of any disease, but instead cause high levels of anxiety among parents and school-aged children (Frankowski, Leonard 2002).

Although both feed on human blood, there are a few differences between body lice and head lice.

For one, unlike head or pubic lice, body lice live in the seams of clothing and on bedding, coming out of bedding to feed during the night or when it is dark (Gammon, 2016). In this way lice have mutually evolved specifically with humans seeing as humans are the only animals that wear clothing. We can also trace back to the first appearance of body lice in evolutionary history by looking at when humans first started wearing clothing. Because body lice have evolved living in the clothing seams of humans which is not as physically close to human skin, they are much more tough and durable than head lice and are therefore able to survive up to a week without human contact (Gammon, 2016).

Another big difference between the head lice and body lice is that while head lice are usually only a concern for hygiene, body lice pose a more serious health threat. This is because body lice can carry diseases like trench fever and lice-born typhus (Pittendrigh 2012). Pittendrigh also notes in an article in Insect Molecular Biology that even though head lice and body lice share so much genetic material that they are not to be confused with one another. Confusing the two could lead to panic because it would seem like if body lice and head lice are almost the same species then they must both be equally dangerous, and that simply isn’t the case.

The symptoms of body lice are very similar to head lice, but appear on any part of the body that may come in contact with clothing rather than on the scalp. Because body lice lay their eggs in the seams of clothing there are no visible eggs on the surface of the skin. However, body lice can be spotted by the unaided eye just like with head lice, and they leave the same irritating marks on the skin. Body lice bites are signified by red bumps on the skin, intense itching, and/or a rash caused by an allergic reaction to the bites (Healthline, 2015).

In conclusion, head lice are only an issue of hygiene while body lice pose a risk of lice-born typhus and trench fever. Little was known about lice in London in the early 20th century, but luckily the Medical Officers of Health kept extensive records of the number of people in each region who were found to have lice. These records have helped us to know how far we have come in eradicating the pest.

Velten, Hannah. “Chapter Seven. London Wildlife: The Persecuted and the Celebrated.” In Beastly London: A History of Animals in the City, 220-21. London: Reaktion Books, 2013.