Pigeons have a longer association with London than any other bird (Velten, 229). However, pigeons started causing harm as the city grew. In late 19th- and early 20th-century London, pigeon caused problems including noise pollution, infrastructure damages, and sanitation problems. Many Londoners complained about the excessive number of pigeons and the nuisances they caused. This resulted in a new laws and public health efforts to decrease the number of pigeons.

There were several ways to deal with nuisance caused by pigeons, for example, spikes along the walls. However, due to the large number of pigeons in London, it was “practically impossible to effect any permanent improvement unless power to kill the birds [was] obtained” (City of London 1925). Therefore pigeon catchers were employed by the public health authorities and many pigeons were captured and destroyed.  However, there were concerns about how “humane” the destruction of pigeons was. In 1931 there was a penalty of two pounds for shooting or trapping pigeons, until the sanitary authority was enabled to take steps to destroy them. (Chelsea 1931).

Feeding the doves of St. Mary’s College, South Street, St. Andrews, Fife, Great Britain. Taken 40 years ago by P. L. Chadwick. via geograph.org.uk Licensed for reuse by Creative Commons Licence. Doves and pigeons were the mascot of the college and people find it sad that they are no longer able to see this sight.

Despite the nuisance caused by pigeons, a large number of people were still opposed to pigeon destruction. There were three major reasons why people were opposing the destruction: 1) pigeons were seen as a great attraction, 2) there were concerns about how humanely pigeons were being destroyed, and 3) pigeons attracted the attention of animal rights activists.

As pigeons had been in the city for an enormous amount of time, they had become part of the city and were considered an attraction. Pigeons in open areas like parks were great attractions, and large numbers of people fed and took pictures of them (Hammersmith 1968). Even though they were often considered a nuisance at night, London citizens thought that “pigeons were as sacred to Londoners as storks were to the Dutch” (Velten, 231). It was clearly stated in several Medical Officer of Health Reports that “no one would venture to suggest the banishment of [these birds] from the City” (City of London 1903) on sentimental grounds, and that “everyone would regret the total disappearance of these birds from our midst” (City of London 1925).

Even if pigeons were nuisance to Londoners, people still cared about pigeons and were upset about the way public officials destroyed pigeons. One of the cases that attracted negative publicity was that of two young men who caught pigeons in Victoria station during rush hour. They caught the birds with their bare hands and stuffed them in their pockets. This was seen as cruel. However, they were actually the pigeon catchers employed by British Railways, as the large number of pigeons were destroying the pavements in the station (Velten, 234). This method of catching pigeons gave the unpleasant image of pigeon destruction, even if it was their job to do so.

These two are not the only reasons why people wanted pigeons to stay. Animal rights activism was the third major reasons people opposed the destruction of pigeons. Animal rights activists’ main aim was to protect the rights of animals in the society and to see them in practice (Sabloff, 113). They argued that animals felt emotional and physical pain, which are inseparable, and hence they acted to make changes so that animals suffered less (Shapiro, 10). They argued that pigeons, just like any other animals, had rights to be protected and therefore the activists were opposed of pigeon destruction.

The actions of activists and others opposing the destruction mainly derived from people’s sympathy for pigeons. There were cases in which volunteers supplied six 25 kg sacks of grain a day in response to mayor of London’s action to stop the food supply for pigeons. The volunteers were part of Pigeon Alliance and they argued that pigeons were dependent upon humans and hence “would starve if they were not fed” (Velten, 231). Likewise, there were several different actions people took to disturb the government’s attempt to curb the pigeon population. One of the main ways was by attracting pigeons away from the trappers. In Westminster, pigeon catchers were interfered “by onlookers whose sympathies were on the side of the pigeons” and “succeeded in attracting them away from the snare of the trapper” (City of Westminster 1927). Later in the same area, the same actions were repeated to oppose the destruction of pigeons, and they distributed food for pigeons away from the cage to attract them and save the pigeons (City of Westminster 1929). Council’s officers visited some of those who fed the pigeons to try to persuade them to stop their actions. However, in most cases, they refused to listen to the officers (Kensington 1938). Several other actions were taken in order to persuade people to not feed pigeons. One of the examples are the posters exhibited in the Borough “appealing to the citizens to co-operate in this matter by refraining from feeding pigeons” (Hampstead 1932). Apart from feeding pigeons, there were also interference, especially near highways, by the residents and other people, which made the pigeon catching practically impossible (Chelsea 1931). 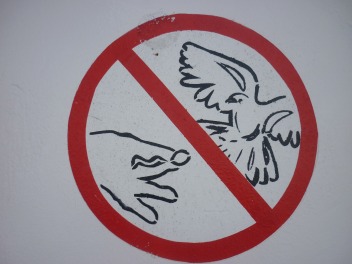 Due to people’s opposition, public health officials’ attempts to destroy pigeons were not very successful. In certain places where the pigeon nuisance was only at copings and cornices of buildings, nesting and roosting were prevented by covering the places with fine wires or cornices instead of killing them (City of Westminster 1929). Taking away eggs was one of the actions taken instead as well. Even when the destruction of pigeons were carried out, their actions were limited to only kill the pigeons that were owner-less (Chelsea 1962). One of the best method for this was trapping with specially designed traps. With suitable food placed inside, it destroyed the birds who were attracted into the trap. However, this special design ensured that the “only wild pigeons are killed, other birds and homing pigeons finding their way into the traps being released” (Woolwich 1963). There were many other governments intervention regarding pigeon catching that would limit their action by law.

Sabloff, Annabelle. Reordering the natural world: Humans and animals in the city. University of Toronto Press, 2001.

Velten, Hannah. Beastly London: A History of Animals in the City. Reaktion Books, (2013).