“The power of life and death in commercial hands is something for which, till recently, there has been no precedent in the world, and even yet the public seems but slightly awake to its importance”, said John Simon, one of the most influential public health specialists in 19th century London, of the fourth and final cholera outbreak in 1866 and East London Water Company’s actions, or lack of  actions, that contributed to the largely disproportional mortality rate in the East End of London, seen below in this Report of the Medical Officer of Health for St. Giles District for 1866..

Despite John Snow’s best efforts to convince his colleagues that cholera was an exclusively waterborne disease, during the 1866 cholera outbreak the majority of the medical officers of health and the general public believed cholera had multiple causes. The public health officers were further convinced of the illegitimacy of Snow’s water theory when the East London Water Company blatantly denied distribution of unfiltered water and, thus, any direct causation of polluted water and the dispersion of cholera. The multi-factorial theories of transmission did very little good for the heavily affected by the disease. It was not until admission of the East London Water Company to violations to the Metropolitan Water Act of 1852 that stricter public control of water companies was demanded. More than John Snow’s work, it was the East London Water Company’s confession to pumping contaminated water that fueled the recognition for the need for a cleaner and safer water system during the cholera outbreak of 1866.

Even after John Snow’s report on the source of cholera, most of the medical community remained skeptical that cholera was a waterborne disease. Of the minority that was convinced of the role of polluted water in the transmission of the epidemic was William Farr, a statistician at the General Register Office (GRO), and his assistant, Edward Frankland.

Initially, Farr was dubious of Snow’s result. The famous statistician was celebrated for his own theory of the inverse relationship between high elevation and mortality rate due to cholera. For a while, Farr was unconvinced of the medical officer’s water theory, until he examined the detailed statistical analysis in Snow’s second, more thorough revision of his original hypothesis. By the outbreak of 1866, and after the death of John Snow, Farr was converted to the waterborne theory. He was positive that the contamination of the Lea River, where the East London Water Company drew their water, and the traumatic mortality rate in the East End of London must be connected.  However, the statistician’s contribution to the theory of transmission has already been widely accepted among his colleagues. In the 1866 Medical Officer of Health Report for the City of London, a table was shown that compares the death rate of previous outbreaks of cholera in different elevations, demonstrating the inverse correlation between elevation and cholera. Areas that were higher in elevation had less cases of death caused by cholera. 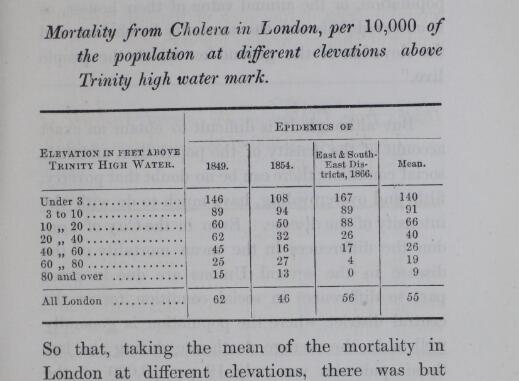 Not only was Snow’s theory rejected by the medical community, many of the most influential health specialists were insistent on the invalidity of the medical officer’s breakthrough. Most conceived that multiple factors were responsible for the spread of the epidemic, including bad air, low elevation, uncleanliness, and population density. Polluted water was, of course, part of the multi-factorial theory, but it was thought to not be the main cause of transmission.

To halt the rumors that they were partially responsible for the outbreak, the East London Water Company’s company engineer, Charles Greaves, stated in The Medical Times and Gazette that the water pumped and distributed from Lea was perfectly safe to drink and use. The confident response was a rebuttal to William Farr’s investigation into the company’s map of the reservoirs. Farr noted that although one of them was covered, three other reservoirs were not, which violated the Metropolitan Act of 1952 that prohibited uncovered reservoirs. The company engineer refuted the accusations by stating that “not a drop of unfiltered water has for several years past been supplied by the company for any purpose” and water from the uncovered reservoirs was also never used, and also criticized the GRO for using out-of-date maps. The determined Farr did not trust the company’s statement and had the water from Lea before and after filtration chemically analyzed. Since the bacteria that cause cholera had yet to be discovered, the chemical analysis yielded no results. In the 1866 Medical Officer of Health Report for Islington, results from the analysis of multiple water companies came to a similar conclusion. The quality of water in terms of contamination from the East London Water Company was not very different compared to other water companies. The inability to chemically distinguish cholera in water became a challenge for the theory of water transmission.

In a surprising turn of events, four months after their initial statement, the East London Water Company admitted to pumping polluted water when demand for supply was high. The deceitful company was met with harsh criticisms, but it was not enough to convince health specialists that water was the medium of transmission for cholera. Many argued that some closed institutions that used water from the company did not contract the disease. As a result of the industry’s disbelief that water was responsible for the spread of the epidemic, the East London Water Company gained confidence and filed for an official pardon from the Board of Trade. The arrogance of the company became its downfall. Multiple scholarly journals exposed that the East London Water Company had been pumping unfiltered water in previous years and taking advantage of the scientific and technical challenges that inhibited the chemical detection of cholera. These views do not imply the acceptance of the waterborne theory but the public’s intolerance for the company’s disregard for the law.

In the midst of this controversy, it was John Netten Radcliffe, an English epidemiologist investigating the source of the cholera outbreak in  the East End of London, that was the most outspoken critic of the East London Water Company.

There had been two main objections to the waterborne theory: first, there was no distinguishable way to identify the disease, and second, some institutions had not been affected despite exposure to contaminated water. For the first objection, Radcliffe requested an objective analysis of the statistics of the areas most affected by the epidemic. The results demonstrated that a region far from a polluted water source was less afflicted by cholera. To the second argument, Radcliffe questioned whether rejecting a theory on the basis of a very few exceptions when so many more areas corresponded to the pattern was logical, especially when people’s lives were on the line. In the long run, it was Radcliffe’s unwavering rational persuasion and detailed analysis of each outbreak of  the epidemic that repudiated opponents of the waterborne theory.

Luckin, W. “The Final Catastrophe – Cholera in London, 1866.” Medical History Med 21 (1977): 32-42.
Header image credit: Map showing the distribution of cholera in London and its environs, from 27th June to 22st July, 1866. Reports of the medical officer of the Privy Council and Local Government Board, 1867.  Wellcome Library, London.