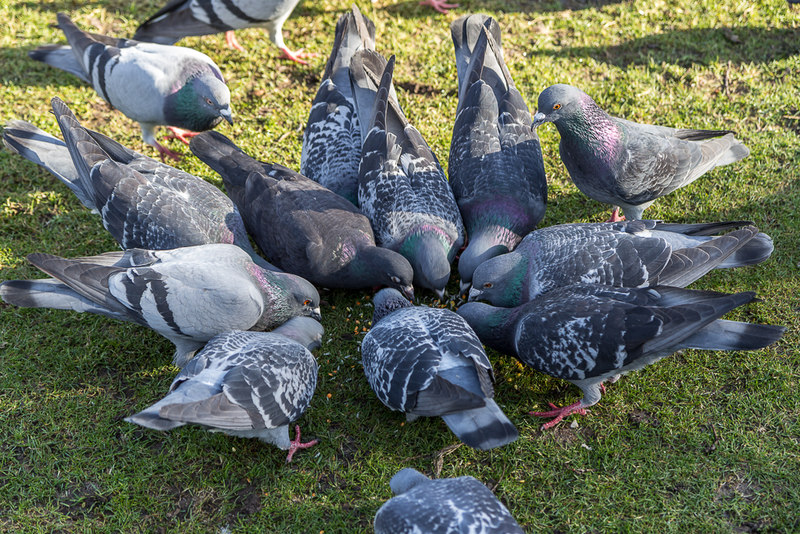 Hannah Velten states in her book Beastly London that among the wildlife in London, pigeons have about the longest associations with the city. In 1926, the number of pigeons in London exceeded approximately 6,000, and filth from their droppings created messes all over the city (Velten, 2013). In 19th– and 20th-century London, birds were one of the most prevalent sources for human infection. A recent study found multiple types of viral particles in the feces of 51 “wild urban pigeons (Columba livia) from Hong Kong and Hungary” (Phan 2013). With pigeons being natural reservoirs for pathogens and having extensive contact with humans in large cities, pigeon droppings were a serious public health threat in London. Pigeon droppings produced waste that damaged buildings, vehicles, trees, lawns, and other public areas. It is estimated that a well-fed pigeon can release 25 pounds of droppings per year. Because they live in urban areas, pigeons do not have a natural predator and can rapidly reproduce. Their growing presence in the first half of the 20th century prompted public health authorities in London to slaughter pigeons to reduce contamination from their excreta. This was a move that was resisted by some Londoners. Eventually a law was passed that allowed the Corporation of London and Metropolitan borough council to seize and destroy pigeons.

Section 121 of the Public Health (London) Act of 1936 gave power to the Council to seize and destroy pigeons when they were a nuisance or threat to public health. In 1961, the Medical Officer of Health for St. Marylebone complained about pigeons:

Where they congregate in flocks their droppings, apart from being unsightly, produce stench and fly nuisance, and many walls and roofs of houses where these birds nest are similarly fouled. (Marylebone 1961).

Similarly, the MOH of Enfield reported in 1965 that:

The pigeon is fast becoming a serious nuisance and the amount of damage to
growing crops and buildings is considerable. The ferral [sic] pigeon, and in some cases the wood pigeon, have adapted themselves to urban life and their numbers are
increasing. Many people consider them attractive and encourage their presence by
feeding them, and oppose any attempt to reduce their numbers.  (Enfield 1965).

Not only were pigeon droppings unsightly, but there was increasing understanding in the second half of the 20th century that pigeons can carry diseases and that parasites can be transmitted from pigeons to humans.For example, the MOH of Camberwell noted in 1952 that pigeons could transmit psittacosis:

This disease is caused by infection with a virus which is harboured by parrots, budgerigars and cockatoos. Canaries, pigeons and domestic fowls have also been proved to be responsible for infection in man. The method of transmission is
contact with infected birds whose droppings contain the virus which may be inhaled by people cleaning the cages or handling the birds. (Camberwell 1952).

In 1971, the MOH for Hammersmith rported ongoing problems with pigeons in his district:

Complaints in respect of pigeons continue to be received. The nuisance they cause includes fouling of washing, buildings and personal clothing; disturbance in the early hours by noise etc. A much more serious hazard has been the discovery of dead birds and their droppings in water cisterns where the pigeons have gained access to lofts. Not all drinking water is direct from the mains and most people clean their teeth in the bathroom where the water supply is via the storage tank. This potential hazard to health in the case of a normal household is multiplied fifty or one hundred times in the case of multi-storied buildings.

He also noted that despite the health hazards posed by pigeons and their droppings, many people still defended the birds, sometimes violently.

It is surprising therefore that in an age where personal hygiene and food hygiene are so greatly publicised and so steadily improving that so many people should continue to feed these pests and encourage their breading [sic]. This misplaced zeal in the love of pigeons on occasions transcends normal civilized behaviour and results in violence being offered to the contractor employed by the Council to get rid of the birds. Recently, in the course of his duties, which he performs as unobtrusively as possible in order to avoid the abuse and threats which are more or less normal to his work, he was physically attacked by a lady and his shirt and pullover torn in the ensuing struggle. The lady in question accompanied him to a nearby Police Station where she apologised for her actions. The apology was accepted and the matter closed. (Hammersmith 1971).

In the observation of pigeon droppings and collecting their samples, recent studies show that there are several types of fungi in their droppings that can be transmitted to the children and elderly (Soltani 2013). Fecal dusts can be drawn in from the rooftops and ventilation of hospitals which pose a serious health risk. Soltani also implies that in order to reduce the amount of infectious diseases that occur the food supply for pigeons is to be reduced and not to feed them thus limiting their population as well.

Actions and penalties to reduce pigeon populations and their droppings were executed among the government, pigeon contractors, and health inspectors. Legal proceedings were also instituted according to the Public Health (London) Act of 1936. In Finsbury in 1955, a property owner was fined for keeping pigeons and ordered to clean the accumulation of droppings from pigeons from the premises and nearby areas, and to pay property damage (Finsbury 1955). In Ealing in 1967, neighbors observed a pigeon infestation and fouling in both the first and second floor of a house.

The council’s pigeon contractor was called in immediately, and in a single night’s operation removed and destroyed no less than 363 adult pigeons as well as countless eggs and dead birds. A notice under section 26 of the Public Health Act 1961 was then served on the owner/occupier to repair the roof and to cleanse and purify the upper rooms. (Ealing 1967).

In the later years, pigeon control became more prominent as the number of pigeons increased. Section 74 of the Public Health Act of 1961, gave the City Council power to remove flocks of pigeons by any means, according to the city of Westminster’s Medical Officer of Health Report (City of Westminster 1966). Paddington’s Medical Officer of Health Report also stated that flocks of pigeons continuously fouled urban areas:

There is no doubt in my mind that in common with dogs, which foul the streets and frequently cause road accidents when off the lead, pigeons in large numbers are not acceptable in towns, and that only good would come from a reduction in their number. (Paddington 1961).

A year later, the Redbridge MOH reported that pigeons were being removed with the use of stupifying baits, which basically paralyzed the bird in order to be seized (Redbridge 1967). If they were not collected within a certain amount of time then the pigeons could escape. In 1969 there was a total number of 1,198 pigeons caught and destroyed by the Rodent Control Staff (Greenwich 1969).