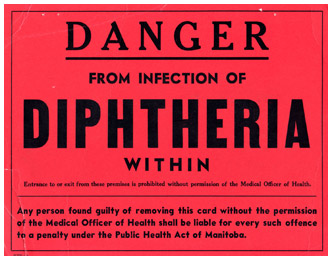 Diphtheria is a disease that is caused from the bacteria Corynebacterium diphtheriae. If not treated, this disease can in some cases be fatal.Throughout this time period, doctors had a difficult time in determining the cause and how diphtheria was spread. The bacterium causing the fatal disease is responsible for producing toxins within the blood that damage the tissue of the body. The bacteria is easily spread through person-person contact. The symptoms of diphtheria are as follows: a sore throat, swollen glands, thick film covering the throat as well as tonsils forming, and nasal drainage.

In Surbiton in 1894, diphtheria spread throughout a school full of children. The MOH determined that the cause of this outbreak was a child being sent to school and sitting at his desk during the time period of being infected. The other children that also sat in the same desk developed diphtheria shortly after. The MOH concluded that the disease was easily spread from person to person, especially amongst children, even if they showed little to no symptoms of the disease.

Another similar instance occurred in Acton in 1924. Two students were in the same class and both tested positive for diphtheria. The doctors examining the children believed that one child caught the disease and then it spread amongst other children within the class. The parents of the student initially infected were not neglectful in identifying the symptoms since the child may not have had obvious symptoms of diphtheria. The doctors did notify the parents of the infected child, but the parents were upset and did not want to believe that their child had passed on a fatal disease.

There were many opinions on how the diphtheria disease was being spread but the main concerns were unsanitary environments and close proximity to an infected persons. A report from Bermondsey in 1858 written by John Challice describes how the diphtheria disease was not truly considered an epidemic at the moment but Challice explains how the disease could easily become one. The reporter also talks about how taking sanitary precautions aid in sustaining from developing the fatal disease (Bermondsey 1858, 22). Another report submitted from John Challice explains how he thinks that the diphtheria disease emerged from Bermondsey into other surrounding areas by person-person contact. Challice describes the disease as the “attack of the tongue” since individuals affected by the fatal disease die of suffocation (Bermondsey 1858, 15).

During the same year, 1858, a reported by the name of John Tripe reported that diphtheria prevailed in Hackney. Tripe talks about how an infected individuals may not necessarily know that he or she is infected and the disease will be spread within all of the family members. (Hackney 1858)

The unsanitary conditions that were present during this time period were extensive. In East Barnet Valley in 1920, many houses were checked that housed individuals infected with the diphtheria disease and found the homes to be satisfactory in the checkup. However, the work environments of the individuals were also checked and the results explained a lot. The report described how although checking the home environment is important, also seeing where and the conditions of the workplace where the individual is employed plays a major role in how the disease was contracted. The report does not report a specific instance but just warns the public to check home as well as work place environments for sanitary precautions and conditions. (East Barnet Valley 1920, 24)

In Battersea 1911, a report was filed that is just a overview for the spread of the diphtheria disease and makes sure to explain to the public that since the disease is fatal, any type of exposure whether it is touching the same pencil or touching an infected persons’ hand, can impact if you develop the disease or not. (Battersea 1911, 83) Since the diphtheria disease is fatal and easily spread, penalties were developed to aid in containing the deadly disease. In Hackney in 1903, penalties were put into place to prohibit infected persons from wandering the streets and possibly infecting others surrounding them. An example of a penalty is Section 68 that prohibits an infected individual from being exposed in the public without the appropriate precautions being taken and if he or she breaks this penalty, a fine will be set not exceeding Five Pounds.(Hackney 1903, 37) To try and contain this disease before diphtheria became an epidemic, isolation hospitals arose.

Diphtheria became a widespread disease during this time. Since the disease is easily passed onto others from person-person contact, children are the most likely to become infected since he or she attend school with other children. The symptoms may not be expressive at first and many did not realize that they were infected. Sanitary precautions were taken in some cases to help contain the diphtheria disease at home as well as in the workplace.

6: Croydon. “Report of the Medical Officer of Health for Croydon” wellcome trust, 1909. p24